September 8, 2011 • Donald Zimmerman
I’ve officially decided it’s time.
I’ve fished my whole life.  Literally.  I was on a lake fishing (well, my Mom was) a couple of days before I was born. True story.
And just like every kid has to leave the putt-putt golf course eventually (because the close every evening) and decide to pick up a set of clubs and venture into “real golf”, I too have come to a cross-roads.  But first, a quick recap of events.
1.  Dad gave me his old Sage rod.  Boom.
2.  I find a fishing vest in the bushes of the Truckee river bank, post ads online, wait 90 days and then “inherit” a ton of fly fishing stuff.
3.  Every time I cross paths with a fly-fishing guy on the river (of whom I can out-fish the vast majority of with a yellow speckled Panther martin or J-11 Rapala), they give you stereotypical disdainful glance.  It’s low grade harassment.  They’ll fish right through you because you don’t count as a real fisherman.  They won’t give you the time of day in conversation.  They see the spinning rod and assume that you are this idiot.  Elitists and pompous yes, but no one likes the putt-putt kid showing up to the driving range either.
4.  A friend and fly-fishing pro has perma-loaned me some boots and waders.  I really have no excuses now.
So…it’s time to make the switch.  Here’s what my first couple of trips turned up:
I know the net isn’t to code, but I took the picture with the fish underwater, so shut it. 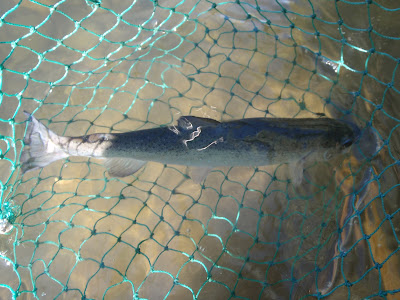 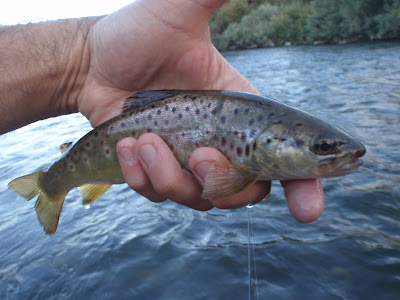 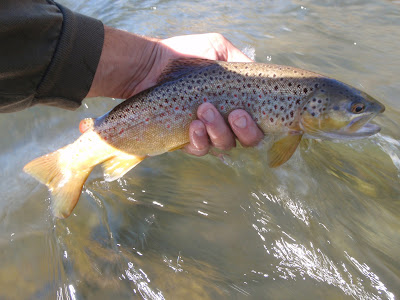 An increasingly uncommon cutthroat on the Truckee.  I suspect they can’t compete with the other species based on the thousands of pounds of Rainbows stocked and the aggressive and tolerant Browns. 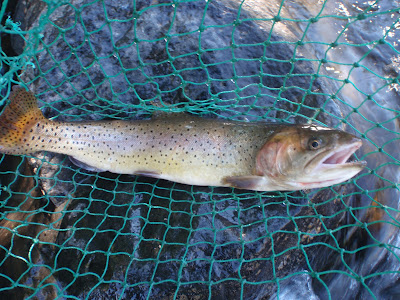 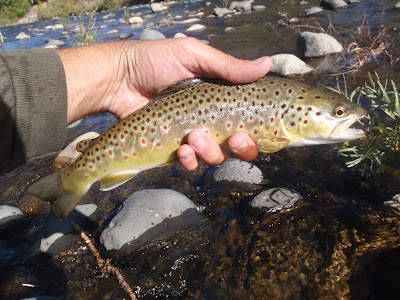 I anticipate a long road ahead.  I’m a pretty pragmatic guy, so the biggest thing working against me is that I can catch plenty of fish on lures.  It’s the same reason I am the fastest hunt-and-peck typer you have ever met or read…literally.  Never had any incentive to do it the “right way”.
Here goes nothing.  And you better believe I plan on breaking all the usual stereotypes of being an ass on the river.