June 13, 2012 • Donald Zimmerman
As obnoxious as it is, you have to listen to this song while reading this post.  Trust me.  Context.
After a brief family trip to the Bay Area, the trip home gave me an excuse to stop in Mountain Hardware and Sports in Truckee, CA.  After some tinkering around the internets this shop seems to be the only place you can get some flies I have been trying to acquire…namely some Skipper Stones and a little fella called the G6.  Would be nice if someone picked them up for distribution in town.  Both of these are crafted by the Truckee’s finest guide, Mr. Matt “Gilligan” Koles 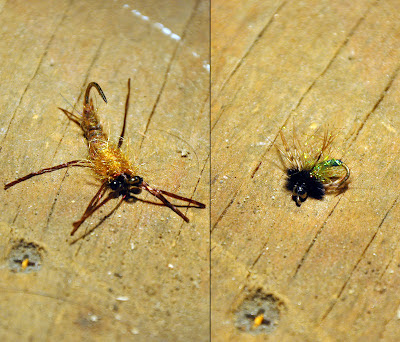 One iPhone function I have been using lately is dropping a rendezvous pin on the map and sending it to a fishing buddy.  This saves lots of obscure descriptions, like “the seventh dead-looking tree on the right” or “after the tire pile, before the abandoned shanty”.  After joining up with a friend, I jumped in downstream and tried out my new flies.
After a slow start, something big and heavy took off downstream towards the casinos.  He didn’t slow down at all with a little thumb drag, but in the instant it took me to look down to adjust my footing, he was gone.  After 30+ casts through the same run, I tipped my hat and blessed his children’s children.  Losing a big one brings out all of my worst personality traits.   It feels like loose ends.  I hate loose ends.
After moving upstream, the wind kicked up and my dropper rig was quickly becoming more trouble than strategic.  I trimmed the G6 off, and threw the skipper alone across some fast, deep water.  Almost immediately, a nice rainbow greeted the fly at the surface, and then thrashed around a bit before spitting the hook.  After 30+ casts through the same run, he returned for a second look.  Pretty uncommon.  The moment when you see a dark shape rise from the blurry stones below the surface and follow your fly for a few yards is priceless.  I think that’s where “the tug is my drug” comes from. 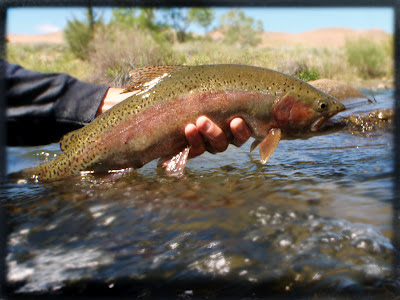 After realizing I was happier to see him than he was me, I got him re-oxygenated and he took off as fast as he hit my fly the first time.  19″ is my streak these days.  I may have to return to this stretch to break the streak and tie up some loose ends.