Autumn is cooling.  Now that many of the cottonwoods have dumped their golden colors, it’s starting to feel like a less glorious, more common Nevadan fall.  The fishing has been tougher, and I am still finding them but in much lower numbers.  If you can wake them, the rainbows seem to be full of piss and vinegar, which I can only attribute to their Germanic counterparts being occupied with “generational investment“.

On my last trip out, I met up with the always cavalier, always dangerous Matt Koles.  On the hike down to the water, he mentioned that his friend Larry would likely join us.  Larry is a threat to many things in field and stream and a savvy writer so I recommend his blog highly.  I’m comfortable saying that “Crazy Uncle Larry” is more manly than I, a claim substantiated by both the length of his beard and the shortness of his sleeves.  Regardless, the crisp 55 degree air made it slow fishing for this clean shaven, multi-layer wearing fisherman and Larry alike.  Gilligan only did slightly better.

Took my Dad to a familiar stretch in west Reno last week and hooked a huge bow that ran downstream and handed my ass to me. This week I went back to the same stretch.
Got a big take, and hoped it was the same hefty bow. Got another take and set the hook.

On retrieval I could see the golden belly so I brought him in quickly as to not expend extra energy. With the fish underwater, I set the timer on the cam so he was out of the water for around 20 sec total. Just enough time for quick pics above/under water and the time it took me to walk 5 steps upstream to make sure I released him as close to where I hooked him. Stayed against the bank to avoid walking on his potential nearby redd.  Hope to catch this fish’s kids in a few years.

Looking below, you can see more missing mouth parts.  Evidence of a treble hook if there ever was some.  It could even be from the degenerate’s streamer I threw a few years ago.  Poor choices have a way of haunting us, don’t they? 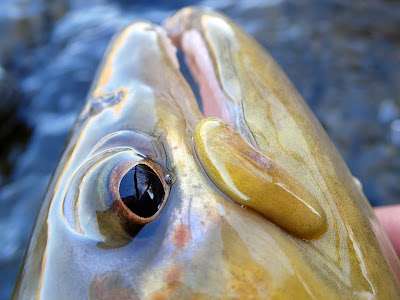 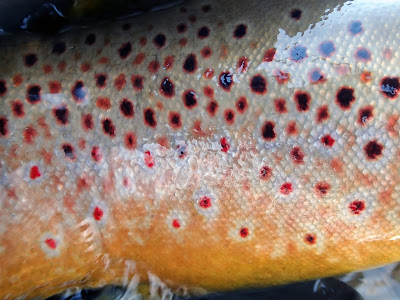 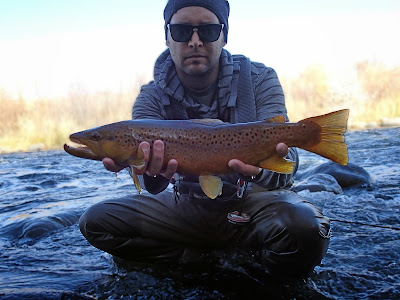 This female black widow was perched about 12″ up a sheer rock face jutting out of water that came up to my chest.  Her nest was chock full of stonefly husks, an admirable strategy.  The protein diet is doing a body good.  This picture needed an object for scale reference.  We killed between 50 and 60 black widows outside my last home in northwest Reno in one summer, and this was hands down the biggest widow I have ever seen. 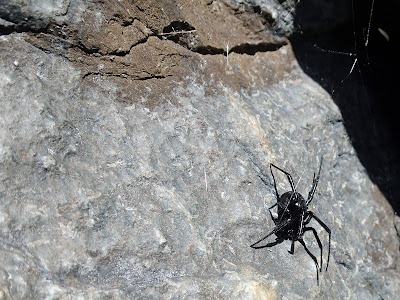 The days are gorgeously mild and dangerously dry.  We need rain.  The lack of precipitation has moved from interesting to concerning.  While it would likely shut down the river a few days, it would be helpful for our part of the country to have a few storms pound through.  Some weather would also push the fish off the fence.  They are seemingly undecided about everything right now; where they want to hold, what they want to eat, etc.  This reflects the world above the water, seemingly undecided about what season it is.

One thought on “Dry Days”